15° – Knight of the East, of the Sword or of the Eagle
Fidelity to obligations and perseverance of purpose under difficulties and discouragement are the lessons of this degree. The striking crimson velvet apron of this degree is edged with green, having a bleeding head above two crossed swords, and a triangle (top point to the left) with three interlaced triangles inside it. The jewel is three golden concentric triangles encompassing two crossed swords.

16° – Prince of Jerusalem
We learn “heroism of patience, the nobility of self-sacrifice” and compassionate judgment, along with charity, fidelity and brotherhood. This crimson apron is edged in gold and aurora-color, and with a square, shield, Delta (with three YODs), balance and a hand of justice. The jewel worn is a mother-of-pearl lozenge with a hand holding a balance in equipoise; under it a sword with five stars surrounding the point. On the left is a Hebrew D, on the right is a Hebrew Z.

17° – Knight of the East & West
The wisdom of this degree is that loyalty to God is man’s primary allegiance and the temporal governments not founded upon God and His righteousness will inevitably fall. The apron worn is of yellow satin, with crimson and gold, and with a sword and Tetractys (of the Tetragrammaton) on it. The jewel is a heptagon of half silver and half gold, with crossed swords on a balance on the obverse and a lamb on the Book of Seven Seals on the reverse. The jewel is hung from a double order – one black (left-to-right) and one white (right-to-left), representing good versus evil. A gold coronet is also presented.

18° – Knight Rose Croix
This degree emphasizes that life and its strength come from God. The rose signifies the dawn and the cross is a sacred symbol of antiquity in many cultures. One is also taught to be tolerant of others errors and their faults. The apron worn is of white leather or satin, bordered in red, with a skull and cross-bones, a red passion cross, and three red rosettes. The grand jewel is a gold compass open a quarter circle. A rose-cross is between the legs of the compass and under it is a pelican, tearing its breast to feed its seven young on the obverse and an eagle with wings extended on the reverse. On the circle are the letters I.N.R.I. 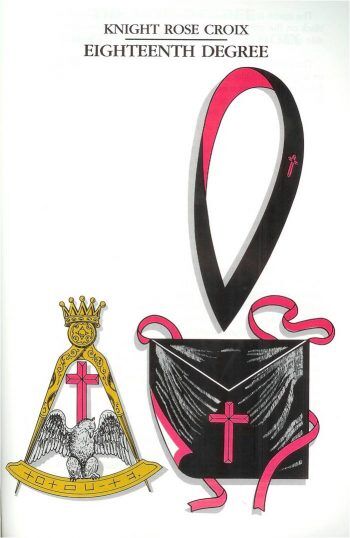